Okay, including What Kate Does we’re now three hours into the final season of Lost. The verdict? 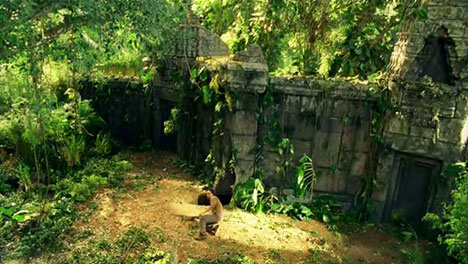 Well, first off the first two hours – the season premier in fact – were absolutely solid. Excellent television – we got the start of the flash-sideways alternate reality device, we got a smoke monster reveal, we got more back story filled out and we got an entirely new setting on the island opened up to us in the form of the temple.

Riveting stuff so far, but not without problems. First off we lost Juliet — apparently because she’s contracted to work on V — and I also find myself slightly disappointed in the whole smoke monster reveal, or at least the part of it that has been revealed so far.

“I’m sorry you had to see me like that.” Hmm . . . okay it was obviously very surprising, and I doubt many people saw that coming and while I’m not saying it’s not entertaining . . . I just wonder where they’re going with this one.

Likewise, the temple section is interesting but who the hell are all these people, including Dogen, and where did they come from?

Are these guys meant to have been there all along? Hmmm, time will tell.