An interesting discussion with Eckhart Tolle at Google. In particular, I like his thoughts on the difference between information and wisdom in a digital age.

Tolle is an interesting man. Some of his ideas lean towards the pseudo-scientific, but the main thrust of his teachings on mindful living are extremely useful, and far outweigh any of the negatives. At least for me — your mileage may, as they say, vary.

So I’ve been using iOS7 on my phone for the last two days and thought I’d post something about it. 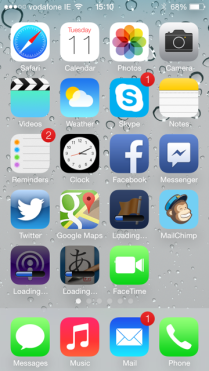 Firstly though, some people will want to know how I have it now when it was barely announced this week and isn’t available to the public until the autumn.

I don’t actually actually have ‘it’ because nobody does, outside Apple itself. What I have is a pre-release beta version. Apple released this build to developers this week so that they can get working on apps that will complement the operating system well in advance.

And actually, anyone can have it now. You just have to register with Apple as an app developer. It costs around €80 and then you can download and install it. Doing so entails a certain risk because by definition beta software isn’t fully finished.

However in this case, the ios7 beta seems pretty stable to me. There are one or two niggling little things that are obviously not quite right, but to all intents and purposes, it works properly and all the functions seem ready to go.

Because it’s beta software, it’s not really fair to write a review of it. Any review published now doesn’t reflect the experience that customers will have when they download the finished version later this year. 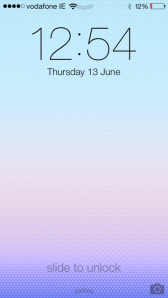 But I do think I can give an opinion, with the caveat that I won’t mention something about it which I feel is likely to be fixed by the time it appears. First impressions? It’s fantastic. A really great operating system that is substantially different in look and feel from iOS6.

Some things will take some getting used to. For instance, the colour scheme is challenging at first. I think it’s no coincidence that Apple has used a white phone in all its promo videos as the colours it’s using now for its flagship app icons look better with that body colour.

Undoubtedly lots of people will be turned off by the bold use of colour and typography, but please remember that Apple was faced with an impossible task here. This operating system is used by so many millions of people that it’s not unfair to say that almost everyone is familiar with it. How do you make a product that makes everyone happy? 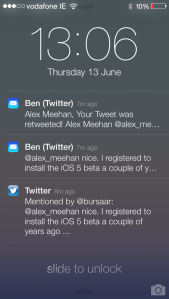 You can’t really. If you’re clever you try to make a product that makes you happy and you hope that this is acceptable to enough people that it’s a success. I think that with iOS 7 Apple has decided not to be all things to all people, and that’s to be lauded. Some people will be put off by the look of it, but you know what, it grows on you.

I looked at my wife’s iPhone 4 next to my iPhone 5 last night to compare the two, and when you see them together, iOS6 looks old fashioned, heavy and clumsy. iOS 7 looks light and vibrant and modern.

Will it age well? We’ll have to see but for now I can’t see myself uninstalling this for iOS 6.

There is an absolutely gorgeous 360 degree scrollable panorama shot of the surface of Mars online.

You can see it full screen here.

Anyone who isn’t excited about this has no soul. This is another planet. Not the moon, not outer space, but an alien world. Stunning. Just stunning. 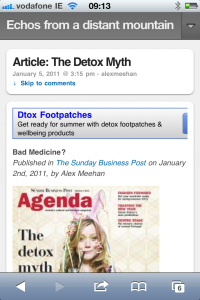 WordPress has an automatically generated theme that kicks in when someone views a WP blog using a mobile phone or other device.

It overrides whatever theme the blog owner has specified, in order to format the text and images on the blog to make it look better on a mobile device.

Weirdly it also includes advertisements, the content of which the blog owner doesn’t seem to have any control over. They’re randomly inserted in by WordPress/Google Ads, based on the content of the blog entry.

Earlier today a reader who looked at my blog through their iphone sent me this image.

It appears that Google ads is not without a sense of humour.

Another one of my features for tech magazine Computerscope has been posted online, so if you’re into that kind of thing, go check it out . . .

There is no shortage of horror stories detailing what happens when large companies drop the ball and suffer a data protection scandal. From lost laptops to mislaid memory sticks, a data protection failure can cause public embarrassment and threaten financial ruin at a time when market conditions mean many companies are particularly ill equipped to suffer a further blow to their business.

At the same time, many companies are exposed to increased data risks as a result of staff and budgetary reductions in the IT department. In particular, IT staff, perceived as non-essential, have been let go from many firms, leaving fewer people to deal with even more work. Under such conditions, data protection can easily seem like less of a priority.  However, with best practice and the latest tools, your organisation can protect itself both from the regulator and the bad guys. The challenge for many companies is knowing where to start.

Who, what and how
“The first thing to know is what data you need to have handled, and who needs to handle it,” said Chris Mayers, chief security architect at Citrix. “What data is really valuable to you – is it your customer lists? Is it intellectual property? Knowing what your assets are is a key starting point, and this will be different for each company, depending on the industry they are in and the kind of firm they are.”

According to Mayers, once companies have identified the data that is crucial to them, they then need to know who needs to have that information, and where they need to be able to access it from. “For example, is it the kind of information they need to have out on the road, or do they only need it if they’re in the office,” he said. 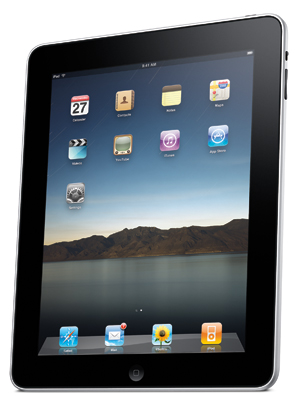 So it’s obviously April Fool’s Day today, but leaving that aside, it’s also the day that the first pre-release iPads are getting unboxed, fired up and written about. First, let’s just get this out of the way – I don’t have one. There, that’s important to say, because I’m a tech journalist and do get bits of kit every now and again to play with and write about. Not today though, mores the pity.

I have just come from reading Stephen Fry’s first look article over at Time Magazine’s website on the iPad however, and as always the wonderful Stephen has articulated something I’ve thought for a while but not put into words.

We are human beings; our first responses to anything are dominated not by calculations but by feelings. What Ive and his team understand is that if you have an object in your pocket or hand for hours every day, then your relationship with it is profound, human and emotional. Apple’s success has been founded on consumer products that address this side of us: their products make users smile as they reach forward to manipulate, touch, fondle, slide, tweak, pinch, prod and stroke.

And that’s why I’ve just decided I need to have one of these. Because I trust Jonathon Ive, the guy who designed the iMac, the iPod and the iPhone.

I’ve had an iPhone for a year or so now – so I wasn’t an early adopter. In fact, I’ve always carried with me a mild dislike of Apple’s technology. I resisted the allure of the iPhone for quite some time, opting instead for the serious business person’s preference, the Blackberry. I remember when I switched to the iPhone – I signed up for a serious contract with O2 for 18 months, got it home and started to think I’d made a dreadful mistake.

It took me ten minutes to type out a text message on the touch sensitive screen and I thought “Christ, I’m never going to be able to actually use this.” Eventually of course, I did get used to it, and now wouldn’t go back to a phone with keys. (Don’t get me started about the size of my first bill however – that’s a whole other rant. €850 plus. Grrrr.)

Anyway, here we are, a year and a half later and I couldn’t imagine running my personal or business life without an iPhone. It’s simply the cleverest, best adapted device of its kind out there — to the point that I don’t think you can meaningfully compare it to other smartphones, and certainly not to the smartphones that were around when it was first released.

But that’s old news. iPhone fan boys waxing lyrical about how good the handset is, well that’s certainly passed into cliche. I’m a fan boy, unashamedly so at this point.I will freely admit that I still don’t see the need that the iPad is designed to fill. However, everything else this company does is drenched in a deep understanding and appreciation for how technology is used, with regard for what it does and how it does it rightful moved down the list of priorities.

So I’ve decided I want one. And that’s not an April’s Fool.

As many of you know, I mostly write technology articles for newspapers and magazines here in Ireland. I don’t usually post that content up here as it tends to be time-specific and of niche interest. However, this piece might be interesting to people. It appears in this month’s Computerscope magazine, a controlled circulation publication.

The publishers only post selected parts of each edition online, and this month, one of my pieces is up and available. It looks at how social media can work for business users.

While getting involved in social media is extremely cheap, and in many cases free, maintaining and growing an online presence isn’t.

It doesn’t cost anything to create a Twitter or Facebook account, or to set up a WordPress or Blogspot blog, but creating content and keeping your online persona visible takes time and effort. At a time when many companies have had to let staff go, the business case for getting involved in social media needs to stand on its own.

So just what is that business case? Is it about business development, or selling more product through using Twitter? Is it about marketing? Should you have a Facebook page because everyone else has one, and if you choose not to bother, will that damage your brand?  The answer depends on the business you’re in and the kind of relationship you want with your target market.

You can read the rest of it here: http://www.techcentral.ie/article.aspx?id=14765#ixzz0hrDItbHb