Tearing up the script
Published in The Sunday Business Post on December 19th, 2010, by Alex Meehan 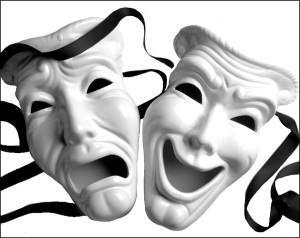 Acting may be one of the most insecure professions of all, but even in a recession it seems there’s no shortage of people willing to follow their dream of treading the boards.

The Gaiety School of Acting is 25 years old next year, and with alumni like Colin Farrell, Stuart Townsend, Flora Montgomery and PJ Gallagher, it has fostered more than its fair share of talent.

With a record 540 people currently enrolled in courses at the school, it seems that the downturn hasn’t been bad for business.

‘‘We’ve been very surprised at the take-up of the courses this year,” says Clíona Dukes, marketing and part-time courses coordinator with the school.

‘‘We were expecting a bad year just like everyone else out there, but actually we’ve seen a huge uptake in our adult classes. It’s hard to say why – certainly, acting is unusual, in that you can dip your toe in the water while still having a full-time job doing something else. It takes work and effort, but that’s what our part time courses are about.”

Founded in 1986 by theatre director Joe Dowling in response to the lack of full-time actor training programmes in Ireland at that time, the Gaiety School of Acting trains people for work in theatre, film and television. It offers a variety of courses lasting from three to four weeks right up to two years, aimed at people of all ages.

‘‘Some want to dabble in acting in their spare time, or they sign up for a short course because they’re looking for a hobby or social activity,” says Dukes. ‘‘Sometimes they just want to meet new people, and I know a lot of people do it because it’s been suggested to them that it might boost their confidence or help their presentation skills in work.”

For people looking to turn an interest in the theatre, TV or film into a full career, however, the school also offers full-time intensive actor training.

‘‘Lots of those people treat the full-time courses as a stepping stone to a career in acting, and our actors have appeared in all of Ireland’s theatres, in film and on television nationally and internationally, and in theatres across Ireland and England,” says Dukes.

While a number of the school’s current students have enrolled after losing their jobs, others have given up their careers to try and break into acting. Among them is Paul Marron, who quit his job in IT to follow his dream.

‘‘Acting was something I’ve always wanted to do, even as a youngster,” he says. ‘‘But when I was about 17 I got carried along towards college, and ended up studying engineering and getting a proper job. I was good at engineering and liked it, but after a few years in the IT sector I knew that acting was an itch I’d just have to scratch.”

Marron is 28, and worked as a telecoms engineer for an IT company contracted to mobile phone company Meteor for five years before deciding to throw in the towel.

He’s now half way through the second year of a two-year, full-time professional acting course.

‘‘I’d been doing some amateur dramatics in my spare time and had some success with it at festivals – I won some awards – and I reckoned that if I didn’t go for it now, I never would. I did an audition for the Gaiety and, as soon as I was accepted, I handed in my notice,” he says. ‘‘Some people thought I was totally mad to throw in a perfectly good job, but others said, ‘Good on you, follow your dream’.

‘‘The way I looked at it, I’d had money and security in my last job, and that really made me realise that those things are not the be all and

end all of life. I’d prefer to have less cash and less security, but really enjoy what I do every day.

Acting isn’t the best paying job in the world, but it won’t feel like work.”

The two-year, full-time course costs €4,950 per year, while a one year part-time course which involves two classes per week, over three ten-week terms, costs €1,800 per year.

Marron saved up in order to afford to do the course, and is happy that his existing IT skills will help him earn a living while he gets established as a jobbing actor.

‘‘When I graduate, I may have to use both my telecoms background and my acting to keep things going, but hopefully if the acting is successful I can go with that,” he says. ‘‘I’d like to go wherever it takes me – the stage, TV, cinema, whatever. I love theatre, but would love to break into film as well.”

Another student at the school, Anne Doyle, had flirted with the stage during her college years, but it was only after a series of health scares and upheaval in her professional life that she gave serious thought to quitting her job as a consultant psychiatrist in order to pursue acting.

‘‘I worked with the National Health Service in the UK for about 20 years but unfortunately got a tumour, and then, five years later, a second one. My work situation also changed – the service I was working on was going to close down, and I’d been invited to work on a new one,” she says.

‘‘Initially I thought that was very exciting, but after the surgery to remove the second tumour I started to rethink things. I realised that while it would be a challenge, I felt I’d already made my contribution To medicine, and maybe it was time to look at something different.”

Doyle first got a taste for acting at university in Galway in the 1970s when she was a member of the NUIG drama society with Garry Hynes and Marie Mullen, who later went on to found the Druid theatre company with Mick Lally.

‘‘I’d had a really good experience with them at that time, so when I decided that I wasn’t going back to psychiatry, I thought I’d love to have another shot at drama. Initially I thought I might be too old, but I’m doing it anyway,” she says.

She has just finished the first term of her first year, and says the experience has been physically very challenging: ‘‘There’s a big physical component to the training; it was exhausting for the first few weeks, but I absolutely love it. I sometimes pinch myself to check I’m really here doing something I enjoy so much.

My only advice to someone else in my situation thinking of going for it is to make sure you’re physically prepared for it.”

She also advises anyone considering a similar path to simplify their life as much as possible.

‘‘There’s lots of homework to be done, and it’s a full-on commitment. You need to be able to dedicate yourself to it fully to get the most out of it.

For someone like me, who gives up a career, there’s no point in only half doing it.”