Fall of Giants, By Ken Follett, Macmillan, €22.99
Published in The Sunday Business Post on October 24th, 2010, reviewed by Alex Meehan 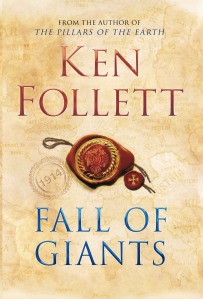 Ken Follett is nothing if not an ambitious writer, and his latest novel, Fall of Giants, represents his boldest project to date.

A sprawling epic, Fall of Giants is the first part of Follett’s Century Trilogy, a retelling of the history of the 20th century through the eyes of five interrelated families in the US, Britain, Germany and Russia.

Ranging from 1911 to 1924, the book tells of the impact of the Russian revolution and the First World War on the people who were most affected by them, with the struggle for female suffrage and the inequities of the class system playing a slightly more minor role.

The story revolves around the lives of five families from different social backgrounds who are all affected by extreme social and political change.

It opens in a small Welsh mining town, with 13year-old Billy Williams setting off for his first day down the mines with his father, a rabble-rousing union man.

Billy’s sister, Ethel Williams, works as a maid in the nearby manor house Ty Gwyn in the service of Earl Fitzherbert, until a naive encounter with the earl leaves her pregnant and desperate.

Maud Fitzherbert, the Earl’s firebrand sister, has strong ideas about the role of women in society, and is keen to make her mark on politics.

However, much to her surprise, she falls in love with Walter Von Ulrich, the son of a German diplomat stationed in pre-war London.

During a society dinner at Ty Gwyn, a young American law student, Gus Dewar, is introduced to the Fitzherberts while on a European tour in advance of taking up a position in Woodrow Wilson’s government.

Meanwhile, in Tsarist Russia, Grigori and Lev Peshkov, two orphaned working-class brothers, find their lives change dramatically when one of them is forced to flee the country to escape the police, while the other gets drawn into the Bolshevik movement and the revolution.

When Archduke Franz Ferdinand is assassinated in 1914, the members of all five of these disparate families are drawn into the conflict that becomes World War I.

By the time the war ends, all have been profoundly changed by their experiences.

The Fall of Giants is a big book in every sense of the word – it’s ambitious in scope and physically large in size, clocking in at a bricklike 850 pages and featuring a bewildering cast of over 120 characters. (Helpfully, a character guide at the front of the book reminds the reader who’s who.)

But despite its breadth, it is highly readable. Follett has managed to write an accessible and fascinating page turner that leaves the reader wanting more, at the same time as staying true to history.

He hammers home just how momentous a period his chosen 13-year stretch of history really was – it doesn’t need embellishing, just illustration.

He has his fictional characters freely interact with key historical figures, but manages to stay on the right side of historical accuracy by making sure no real-life movers or shakers act out of character or contrary to their true tendencies.

Seeing these events through the eyes of well-drawn and believable characters is an engaging history lesson, much more compelling than any documentary or textbook could be.

However, the book is not without fault, chief among them the inclusion of a number of gratuitous and incongruous sexual encounters.

It will be interesting to see if Follett can sustain the pace he’s set through to the second and third instalments of his Century Trilogy.

With Part Two set to deal with the Great Depression and World War Two, and Part Three the Cold War, he has created for himself the kind of literary challenge that would make most authors very nervous.

That he seems, so far, to be pulling it off is extremely impressive.