Published in The Sunday Business Post on January 25th, 2009, reviewed by Alex Meehan

Since the mid-1980s, Garrison Keillor’s Lake Wobegon books have enjoyed a cult following among readers who delight in his colour f u l and homely depictions of Middle America. Liberty is the latest Wobegon novel to see publication, this time telling the story of town resident Clint Bunsen and his struggle to come to terms with turning 60, and the sensation that his life is mostly behind him. 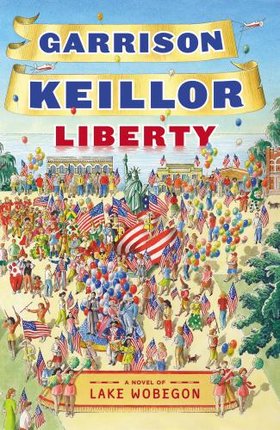 Lake Wobegon is a mostly Lutheran enclave of conservative Americans of Norwegian descent and Bunsen is the town mechanic. However, more than that, he’s an organiser with a flair for the big picture.

The chairman of Lake Wobegon’s Fourth of July festivities, he’s spent six years bringing the festival to national prominence, culminating in a 4 second mention on CNN only last year.

Bunsen works hard and isn’t afraid to ride roughshod over the sensitivities of others, yet for some reason the town isn’t universally grateful for his efforts.

He has ruffled some feathers in establishing his new style of parade management and his festive priorities have included doing away with lengthy readings oft he declaration of independence and banishing tractor-driving red necks from the town parade.

The result is that the more conservative elements in Lake Wobegon have decided enough is enough. A shocked Bunsen i s bumped off the organising committee and, with his resentment festering, decides he will run for Congress to show the small town cynics a thing or two.

But before he can act on his new plan, he’s distracted by a chance encounter which leads to a romantic entanglement. Buxom 28-year-old redhead Angelica Pflame is everything Bunsen’s wife isn’t. Young, optimistic, open-minded and sexually adventurous, Pflame represents the life Bunsen might have had if he had listened to his instincts as a younger man and stayed in California.
Click Here!

Instead, he played it safe and returned to Lake Wobegan to marry Irene, his high school sweetheart. Following a steamy fling with Pflame, Bunsen seriously considers leaving Lake Wobegon and heading to the west coast with his new sweetheart.

An explanation for Bunsen’s uncharacteristically hot-blooded behaviour comes to light when his doctor recommends he undergoes a genetic check up and has his DNA tested. He discovers that one of the rocks upon which he has built his life is not as solid as he thought.

The tests show he’s not of Norwegian descent after all – he’s actually half-Spanish. Meanwhile, the Fourth of July is rapidly approaching and the organising committee come crawling back for help.

At first glance, Liberty and the Lake Wobegon stories appear to be fairly lightweight, albeit charming reading, a sort of literary Vicar of Dibley or Last of the Summer Wine. But although they may be comforting in their cosiness, Keillor is a well-regarded satirist and broadcaster.

In the gentle humour of Liberty’s story, there lies some incisive insight into the Middle American, Republican mindset.

Liberty may not be a riveting plot-driven read, a gripping who dunnit or a engrossing thriller, but there’s enough quality material here to make it worth recommending.